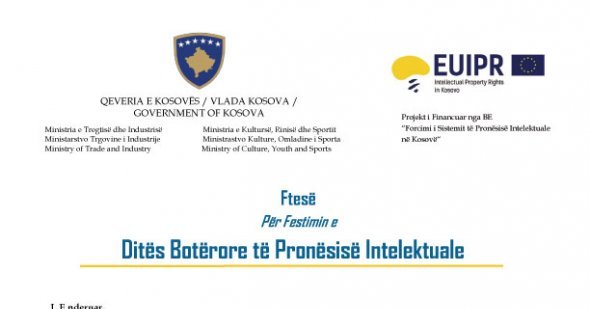 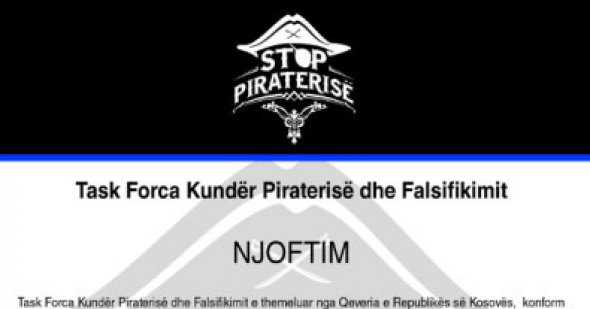 The campaign against piracy and counterfeiting has begun - any unauthorized material after 15 August will be seized and offenders will be prosecuted Task Force Against Piracy and Counterfeiting, established by the Government of the Republic of Kosovo, has launched today the information and education campaign against piracy and counterfeiting, under the motto "Stop Piracy". All the informative campaign will be under the management of the Ministry of Culture, Youth and Sports, which is also heading the Task Force.
Stay Connected
Për avancimin e mëtejmë të drejtës së autorit dhe të drejtave të përaafërta.
FAQ
What is piracy?Piracy includes the reproduction and distribution of copies of copyright-protected material, or the communication to the public and making available of such material on the Internet, without prior authorization of the right holder, where such authorization is required by law. I do not trade illegal copies but I buy them. What is recommended?Orientate yourself towards buying the original copy. Pirated material consumption increases their production.

Information and awareness campaign - Within its own activity, the office is obliged to inform the public about copyright and related rights, and to this purpose was realized the official campaign, which was opened on 23 April 2012 by the Minister of Culture, Youth and Sports, Mr. Memli Krasniqi, under the motto "Kosovo Protects the Author".

This campaign was conducted with various activities, namely through leaflets with questions and answers about copyright and related rights, audio-visual commercials realized on the national television RTK, internet news portals and audio advertisements on national radios.

Moreover, within the campaign, various meetings with artists and other right holders were conducted, as well as a lecture was given to young people.

As part of the awareness campaign, the two-day conference was held on 5 and 6 June 2012, on "Collective Management of Copyright and Piracy". Keynote speakers at the conference were experts of the field, from Slovenia, Hungary and Brussels.

The conference has been attended by a huge number of participants from the country's creative community.

Within the organization of awareness campaigns, starting from 15 June 2013, a campaign was conducted under the slogan "Stop Piracy". As part of this campaign, a one-day conference has been conducted, and it was attended by institutions whose activity is related to the field of intellectual property, collective associations for administration of copyright, and a large number of artists and businesses.

In order to inform all citizens of the Republic of Kosovo, Anti-Piracy Task Force has published a notice in all print and electronic media, where has notified all persons who make the production, distribution, sale or placement online, of the products which contain material protected by copyright, that are required to obtain the relevant contracts and authorization from the rights holders. By this announcement, all citizens were informed about actions that were going to be taken by the Task Force.

Also, within the Campaign, brochures containing information material on piracy, copyright,
anti-piracy Task Force and the Copyright Office have been published.

These brochures were distributed everywhere, especially at the sale points of materials protected by copyright. Also, in the framework of the campaign, it was also produced a video-announcement which was broadcasted on several television and information portals.

So far, the Copyright Office has undertaken a number of activities that purport to establish a functioning system of copyright. It is planned that with the implementation of projected activities, the system of copyright in the Republic of Kosovo can be further strengthened.